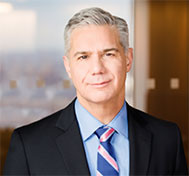 Eric R. Dinallo is Chair of the firm’s insurance regulatory practice and a member of its Financial Institutions and White Collar & Regulatory Defense Groups in New York.

Mr. Dinallo is a broad-gauged financial services lawyer, who focuses on developing and executing regulatory strategies for clients involved in transactions in the insurance sector. He also counsels financial institutions, including banks and insurers, facing investigations or enforcement actions from insurance regulators, state attorneys general and prosecutors.

Mr. Dinallo has a broad range of public and private sector experience. Most recently, he served as the Executive Vice President and General Counsel at Guardian Life Insurance Company of America, where he led the company’s legal, regulatory, compliance and government relations functions, as well as its corporate governance activities. Under his leadership at Guardian, his department was recognized as the “Best Overall Governance for a Private Company” by Corporate Secretary Magazine and was also the sole finalist for Corporate Counsel Magazine’s “Best Legal Department”. Prior to his time at Guardian, Mr. Dinallo was a partner at Debevoise for seven years (2010-2017). Earlier in his career, he served as the New York State Superintendent of Insurance (2007-2009), where he led the department to become a national model on insurance regulation and a respected voice on the industry’s role in the financial system. Mr. Dinallo worked with the United States Treasury Department, the Federal Reserve Bank of New York and others in the restructuring of financial services giant AIG, for which he was named a “Dealmaker of the Year” by The American Lawyer in 2009. He earned national acclaim for leading successful negotiations between developers and insurance companies over the World Trade Center site, and in 2008 he received the “Esprit de Corps Award” from the National Association of Insurance Commissioners for accomplishments as an “ambassador for state-based insurance regulation.”

Prior to his term as Superintendent, Mr. Dinallo was the General Counsel of Willis Group Holdings (2006-2007), supervising the legal, compliance and internal audit departments. He was the Managing Director, Global Head of Regulatory Affairs of Morgan Stanley (2003-2006), where he designed and led top-to-bottom reviews of conflicts and business practices, and achieved major shifts in the firmwide regulatory strategy. Mr. Dinallo served as Chief of the Investor Protection Bureau in the Office of Attorney General Eliot Spitzer (1999-2003). He also served as an Assistant District Attorney in the New York County District Attorney’s office (1995-1999), where he had primary responsibility for securities fraud and white collar and insider trading investigations and trials.

Mr. Dinallo has spent significant time in public service. He was a primary election candidate for New York State Attorney General in 2010. During the campaign, Mr. Dinallo received endorsements from Crain’s New York Business and the New York Daily News and was lauded for his performance in The New York Times/NY1 News primary debate. Following the election, he served as Co- Chair of the Economic Justice transition committee for New York Attorney General Eric Schneiderman. Previously, he served as Co-Chair of the Criminal Justice transition committee for Andrew Cuomo in 2006.

Mr. Dinallo has testified over a dozen times before the Financial Crisis Inquiry Commission, state legislators and committees of both houses of Congress on credit default swaps, the restructuring of AIG, long-term health care, bond insurance and terrorism insurance, among other issues.

Mr. Dinallo received his B.A. in Philosophy in 1985 from Vassar College, and his M.A. in 1987 from Duke University School of Public Policy. Mr. Dinallo earned his J.D. from New York University in 1990, where he was Review and Essay Editor of the New York University Law Review. He clerked with the Hon. David M. Ebel of the U.S. Court of Appeals, Tenth Circuit in Denver (1990-1991). Mr. Dinallo serves on the Board of Directors of the American Institute for Stuttering.