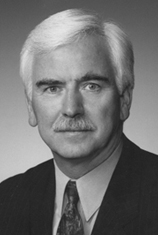 While Superintendent, several of Mr. Corcoran’s reform measures gained national attention, particularly the development of model laws dealing with financial guaranty insurance and the model demutualization bill which was promulgated by the NAIC.

At the request of fifteen Congressional Committees, Mr. Corcoran testified on various financial regulatory issues, including the integration of financial services, financial guaranty insurance, and various solvency issues. In 1986, he was instrumental in drafting the New York Omnibus Liability Act. This tort reform measure modified the doctrine of joint and several liability, established a new standard for appellate review and imposed penalties for frivolous litigation.

While Superintendent and in private practice, he helped to expand the international market for U.S. insurance companies in Asia, Europe and Latin America. He has conducted seminars sponsored by the World Bank on insurance regulatory oversight in Malaysia, the Philippines, Singapore, Taiwan and Thailand. He represented the United States Department of Commerce before the Insurance Committee of the Organization of Economic Cooperation Development (OECD) in Paris on several occasions and is a member of the International Insurance Society.

Mr. Corcoran was appointed to the Sage Commission by Governor Andrew Cuomo. The Commission was created to improve the delivery of government services, increase accountability and save taxpayers money.

He has represented clients before various state regulatory agencies for over 40 years. He has participated in the resolution of many regulatory compliance settlements, the World Trade Center claims and class action settlements, and the design and implementation of mandated corporate governance and compliance programs. In addition, he has completed multiple arbitrations as an ARIAS•U.S. Certified Arbitrator and provided expert testimony in several complex matters.
He received his BA from Iona College in 1966, and JD from Fordham University of Law in 1969.