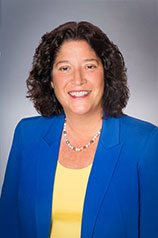 Maria T. Vullo served as the Superintendent of the New York State Department of Financial Services for three years from 2016-2019. As Superintendent, Ms. Vullo was responsible for the regulation of New York’s financial services industry, including all New York State chartered banks, branches of foreign banks, non-depository companies, and all insurance companies and agents licensed to do business in New York. Ms. Vullo managed an agency staff of 1,400 employees with a budget in excess of $250 million. Ms. Vullo was nominated for the position by Governor Andrew M. Cuomo and confirmed by the New York State Senate.

Prior to assuming the role of DFS Superintendent, Ms. Vullo was a litigation partner for many years with Paul, Weiss, Rifkind, Wharton & Garrison LLP. She is an experienced trial and appellate litigator in civil, criminal and regulatory matters, including in banking, insurance, securities, real estate, antitrust, healthcare, bankruptcy and other complex business disputes. Ms. Vullo also is an experienced counselor to public and private companies. In addition, Ms. Vullo served as Executive Deputy Attorney General for Economic Justice in the Office of the New York Attorney General, where she supervised the Investor Protection, Real Estate Finance, Antitrust, Consumer Protection, and Internet Bureaus.

Presently, Ms. Vullo is CEO of Vullo Advisory Services, PLLC, a strategic advisory firm specializing in insurance and banking regulation, corporate compliance, cybersecurity and data privacy, fintech and insurtech. Ms. Vullo serves on the boards of Scientific Games Corporation and DayForward Life Insurance Company. She also serves as Regulator-in-Residence at the Fintech Innovation Lab NYC, as an Adjunct Professor of Law at Fordham Law School, and on nonprofit boards.

Ms. Vullo is the recipient of numerous awards, including the 2018 Insurance Woman of the Year Award by the Association of Professional Insurance Women, the 2018 Excellence in Consumer Advocacy Award by the NAIC Consumer Representatives, and the 2017 Mario Cuomo Public Service Award by the National Italian American Foundation. She has been named a Super Lawyer for numerous years and has the highest Martindale Hubbell rating for excellence and ethics. Ms. Vullo was twice nominated by the New York State Commission on Judicial Nomination to be an Associate Judge of the New York Court of Appeals.

Ms. Vullo holds a JD from the New York University School of Law, an MPA from NYU Wagner’s Graduate School of Public Service, and a BA and an Honorary PhD from the College of Mount Saint Vincent.