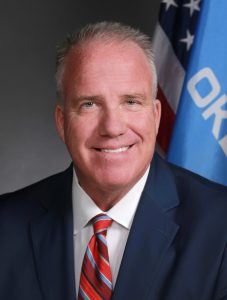 Glen Mulready became the 13thOklahoma insurance commissioner after receiving 62 percent of the vote. He was sworn into office on January 14, 2019.

Glen is a recognized leader and champion in the insurance industry. Starting as a broker in 1984, Glen rose to serve at the executive level of the two largest health insurance companies in Oklahoma. In 2007, he joined Benefit Plan Strategies, a company helping businesses provide employee benefits and health insurance to their employees.

In 2010, Glen successfully ran for state representative and quickly became the point person for the House of Representatives on insurance issues and was appointed chairman of the Insurance Committee after the 2014 elections. In this role, Glen passed legislation which resulted in more insurance companies offering service in the state, and he reformed the state employee insurance program to save Oklahoma millions of dollars a year while also saving thousands of dollars for those families. In addition, Glen authored and passed a plan which, when fully implemented, could save taxpayers one billion dollars in the state’s Medicaid program over 10 years. These successes led to Glen being tapped for the leadership position of Majority Floor Leader in 2017.

Glen and Sally, his wife of 30 years, are the proud parents of three teenage sons, Sam, Jake and Will. In 2008, Glen and Sally were the recipients of Leadership Tulsa’s Paragon Award for their work with Big Brothers Big Sisters. Glen is very active in the community having served on numerous boards and committees including Big Brothers Big Sisters, the Juvenile Diabetes Research Fund, March of Dimes, Shepherds Fold Ranch Christian Summer Camp, Crime Commission and Tulsa Tough.