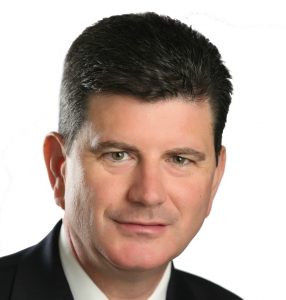 James Wrynn is a Senior Managing Director in the Global Insurance Services practice of FTI Consulting and is located in New York. He has more than thirty years of experience as an insurance executive, attorney, regulator and strategic advisor in the global insurance sector, earning wide recognition as a premier authority on domestic and global insurance regulation and related strategic and risk management matters. James has served in a number of roles throughout his career, including as the 40th and last Superintendent of Insurance in the State of New York. He was also heavily involved in creation of the New York State Department of Financial Services and was its first Deputy Superintendent.

In his capacity as Vice Chair of the International Committee, James represented the United States as a member of the IAIS, an organization of insurance supervisory authorities from more than 200 jurisdictions in nearly 140 countries that develops international insurance principles and standards for insurance regulators. He had a leadership role in discussions on numerous international issues such as Solvency II, an economic risk-based solvency regulatory framework to be utilized by all European Union member states; Systemic Risk, the development of a methodology for the identification of systemically important global financial institutions and the measures to be implemented once identified; ComFrame, the development of a common framework for the supervision of internationally active insurance groups; Group Supervision; and numerous other issues and initiatives.

Prior to joining FTI Consulting, James was Managing Director and Vice-Chair in the U.S. for Guy Carpenter’s Global Strategic Advisory Group. Immediately prior to joining Guy Carpenter, he was a Senior Partner at the law offices of Goldberg Segalla, LLP in New York, and lead the firm’s Global Insurance Regulatory Practice, which consisted of an international team with extensive experience serving U.S., Europe, Bermuda, and other key regulatory markets.

James is admitted to practice before the Supreme Court of the United States, the U.S. District Courts for the Eastern and Southern Districts of New York and the U.S. District Court for the District of New Jersey. He has earned a Martindale-Hubbard Peer Review rating of AV Preeminent, has been rated a top lawyer in insurance law by American Lawyer Media and Martindale-Hubbell and has also been ranked as a top lawyer in insurance coverage by New York Metro Super Lawyers. In addition to holding a J.D., James also has Associate in Captive Insurance and Associate in Risk Management certifications. He is a frequent speaker and author on insurance, governance, risk and regulatory matters.